Trending
You are at:Home»News»Another cruise terminal in Barcelona
0
SHARES
ShareTweet 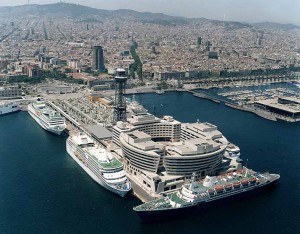 The terminal will be built next to the Carnival terminal that is still under construction. It will be the eighth and serve to accommodate larger ships.The port of Barcelona is the main hub for Mediterranean cruises. In 2013 Barcelona has had 2,5 million of pasengers, but the numbers continue to grow, as well as the size of the ships.On 18 May has been beaten the record of arrivals in a single day: 31,000 from seven different ships, which have generated for shopping centers in the Catalan capital a turnover of 3.5 million Euros.In September of 2014 it is expected the arrival of the “Oasis of the Seas’, the largest cruise ship in the world, which belongs to Royal Caribbean, with a capacity of 6,300 passengers, which this year will have the Catalan capital as her home port. The next year, Barcelona will also receive “Allure of the Seas”, the sister ship of the “Oasis of the Seas”, that will have 25 calls. Barcelona will expect a flow of 175,000 cruise passengers, with an impact on the city estimated at 17.5 million euro. To cope with this growth, the existing terminals become tight.